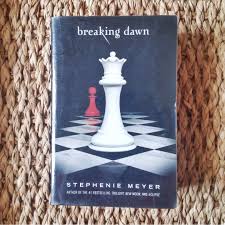 “well, the epilogue is called “HAPPILY EVER AFTER”

ps i took notes for you guys over the phone tyvm

it appears that everyone is at the cullen house, with a bunch of foreign vampires like an amazonian tribe and an irish coven oh and the denalis, chattin bout how they BEAT UP THE VOLTURI! carlisle is talkin bout how he’s prepared to fight them again should they ever try, bc t

they went to far and blah blah blah… jacob is there, obviously still alive, and they talk about how the wolves were the biggest reason the volturi backed down

also, jacob brings up the fact that there are TRUE werewolves out there, with the full moon and everything, but idk wtf significance that was

in the epic battle i’m assuming was before, tanya lost a sister.

bella has obviously become a vampire BUT NOT BEFORE SHE GAVE BIRTH TO A CHILD… EDWARDS CHILD WHO IS HALF VAMPIRE AND NAMED NESSI AND APPARENTLY VERY CUTE. bella’s special power that really saved their asses was she has like a love shield (omg lily potter wut) and alice, jasper, esme, and carlisle and edward are all just fine.

emmett is too but there is no mention of rosalie.

oh, sue and charlie are now an item. idk idk i love that

edward and bella are makin out after puttin their kid to bed. my sister becomes srsly embarassed bc i made her read it out loud

and the last sentence is something like ‘and we have forever’.”

i was with edward. forever.

the cottage was a place of perfect peace…

we carried nessie to her bed/crib and gently tucked her in. she smiled as she slept.

i took alice’s gift from around my neck… lightly… the corner of her room. she could play with it as she wished, she liked sparkly things.

edward and i walked slowly to our room, swinging our hands between us.

“a night for celebration,” he murmured (ALWAYS WITH THE MURMURING, THIS HAS TO BE REAL), and he put his hand under my chin to lift my lips to his.

“wait,” i hesitated, pulling away.

“i want to try something,” i informed him, smiling slightly at his bewildered expression.

i put my hands on both sides of his face and closed my eyes in concentration.

i hadn’t done very well with this when Zah…? had tried to teach me before, but i knew my shield [better now]. i understood the part that fought against separation [from] me, the automatic instinct to preserve self above all else.