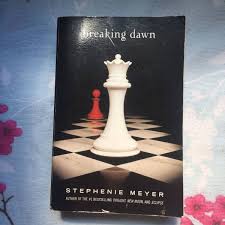 “well, my sister called me today while i was at work and i left everything to my coworker so i could take notes for ya’ll. ida, my sister, started on page 84, which is the chapter the ISLE OF ESME which is apparently a tropical beachy place where edward and bella are honeymooning. idk exactly where it is bc we wanted to get straight to the secks lol

edward and bella are on a beach. bella talks about how the water is warm, almost like bathwater, so warm that edward’s touch isn’t frozen. she asks him something like “isn’t the moon beautiful?” while standing in the water and he sighs and said “not in comparison to you” LOLFEST WITH MY SISTER

bella drones on and on about how in that moment, she realizes that her and edward are meant for each other “fire and ice existing together” etc etc blah blah… and THEN we get to the “good” part. edward tells her “i told you we would try” and they start kissing and embracing under the moon, and the reality of their ~true love~ comes crashing on them like waves… edward’s feet make ripples in the water while he and bella make out and they share a passion so intense etc etc…

but not before edward stops and says “promise to stop me if it’s too much” and she’s all “uh huh ya do me” and then he pulls her into deeper water, his hands tracing little shapes on the small of her bare back and…

FADE TO BLACK MOTHER FUCKER! WHICH ONE OF YOU SAID THAT WOULD HAPPEN BECAUSE YOU WERE RIGHT!

to make it clear, bella is still in human form, unbitten if you will

so she wakes up the next morning, relishing in her utter and complete happiness while keeping her eyes closed, listening to the soft wind in the palm trees and the waves crashing on the beach. edward realizes she’s awake and traces her spin ever gently with the tips of his icy fingers, but when bella finally opens her eyes she sees him staring straight up at the canopy, his jaw flexed and his eyes tense. bella’s stomach rumbles, and he kind of laughs.

she asks him “wuts wrong bb?” but he doesn’t say anyhting, he’s just super pissed and pensive like the sullen cullen we know, and bella instantly starts internally freaking out thinking she did something wrong, until finally she’s like “EDWARD WHAT IS WRONG I CAN’T HANDLE THIS SHIT” and he’s like, “bella, you broke your promise. i hurt you” and in her mind she’s like, ‘well, ya, actually my hips feel like they’ve been disjoined from my body and my muscles feel like jelly but it’s not that bad’ and then edward tenderly lifts up her arm to display bruises appearing on her fair skin in the shape of his fingers. lol, rough sex

bella repeatedly assures him that it was never too much and then notices, for some reason, that there’s hundreds of feathers everywhere… down feathers. she looks at him quizzically and is like “feathers…? why?”